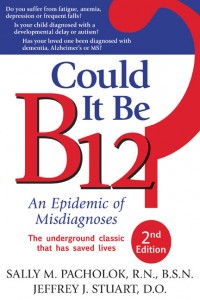 The underground classic that sparked a patients’ rebellion and saved lives, Could It Be B12?, is revised, updated and expanded in a second edition.

“The definitive book on B12 deficiency, diagnosis and treatment.” —Jeffrey Dach, M.D.

“I can honestly say this book saved my life. “ —Reader Review, Amazon.com

Vitamin B12 deficiency is a public health crisis that even most doctors don’t know exists. Millions suffer from it, but few are diagnosed. Left untreated, it causes permanent, crippling nerve damage—and too many patients don’t get treatment until it’s too late.

Only one book has ever revealed the full extent of this silent epidemic and taken a principled stand against the medical establishment’s indifference. That book became an underground classic that ordinary patients passed to one another and discussed among themselves, and grew into a movement that every year draws more and more patients to take control of their own diagnoses and find the truth. And now, in a second edition that is revised, updated and expanded with the latest scientific findings, Could It Be B12? An Epidemic of Misdiagnoses (Quill Driver Books, February 2011) by Sally M. Pacholok, R.N., B.S.N., and Jeffrey J. Stuart, D.O., remains the most authoritative guide to vitamin B12 deficiency.

Six years after its original publication, Could It Be B12? continues to generate heated debate. Doctors are often uncomfortable about its claims—but no physician who has read the book can deny its evidence. And no book is more cited by ordinary people who have personally suffered from this disorder. On the Internet, in doctors’ waiting rooms, in private conversation, wherever people talk about mysterious ailments their doctors can’t seem to effectively treat—pain and tingling in the limbs, unexplained fatigue, dementia or mental illness— people ask, “Have you read Could It Be B12?”

Could It Be B12? uncovers how standard medical practice has for decades misdiagnosed vitamin B12 deficiency, condemning countless patients to chronic poor health and life-altering permanent injury. Few patients are tested for B12 deficiency, even though it’s a common disorder that can be easily diagnosed and inexpensively treated. The manifold symptoms of B12 deficiency can look exactly like a myriad of different diseases, misleading doctors to misdiagnosis. B12 deficiency can mimic dementia, multiple sclerosis, early Parkinson’s disease, diabetic neuropathy or chronic fatigue syndrome. It can cause depression and mental illness, infertility in men and women, or developmental disabilities in children.

Written in a highly accessible style that makes complex medical information clear and comprehensible to ordinary patients and their families, Could It Be B12? demonstrates how B12 deficiency is often the underlying cause of many seemingly hopeless problems. With extensive comparisons of treatment options, Pacholok and Stuart prove that early detection and treatment of B12 deficiency can save lives at a cost that’s literally 10 cents a day—and save billions of scarce health care dollars nationwide.

A CALL TO FIGHT THE MEDICAL ESTABLISHMENT AND TAKE ACTION

More than just a medical guide, Could It Be B12? is a call to action. Written by passionate advocates who believe firmly in patients’ rights to needed treatment, Could It Be B12? gives ordinary patients the knowledge and confidence to fight the ignorance and rigidity of the medical establishment and take control of their own treatment. Could It Be B12? gives readers vital information and strategies to learn if they or their loved ones are suffering from B12 deficiency and how to work with health care professionals to get the treatment they need.

Could It Be B12? also presents a stirring message against the medical profession’s indifference to the epidemic levels of crippling B12 deficiency and demands worldwide social action to raise awareness and win the fight against this easily prevented disorder that so needlessly ruins millions of lives. Thoroughly researched, clearly written and filled with a generous anger against needless suffering, the second edition of Could It Be B12? is a book for the heart, head and pocketbook—a worthy update to a modern classic that will continue to serve as a wake-up call to the health care community and the public.

Title: Could It Be B12? An Epidemic of Misdiagnoses, Second Edition

Available from bookstores, online booksellers and