On November 18, 2009, film and television producer Elissa Leonard approached us regarding producing a documentary on vitamin B12 deficiency. Elissa became interested in B12 deficiency after reading the first edition of our book, Could It Be B12? An Epidemic of Misdiagnoses, and learned one of her own family members was afflicted.  Elissa has joined us and is passionate about educating the U.S. about this unrecognized disorder. Her goal is to uncover whatever truths she can find: “Is there an epidemic of misdiagnosis? Do doctors know what to look for and are they looking for it? What is the state of our scientific knowledge? Has the federal fortification of foods with folic acid caused harm and to whom?” she says, “This would be the definitive B12 movie.”

Elissa began her interviews in 2010, and we were interviewed in late September.  Her documentary was completed in late 2011 and is now available to view on our website on this page (see B12 Documentary by Elissa Leonard) and on the B12 Documentary page. Elissa has spent years producing and writing a health/science/technology documentary series for PBS called Innovation. She has won two Emmys for her work on Innovation. Elissa was also the Head of Story Development for Explorer, a series on National Geographic Television. She has the contacts and credibility with the right people to get this film aired. We are hopeful this documentary will create even more B12 deficiency awareness so lives can be spared as well as save billions of health care dollars. Please post your comments and reactions to the film below. We are hopeful Elissa will be able to get her film viewed by 60 minutes, Dateline, PBS or any other responsible and informative news program. 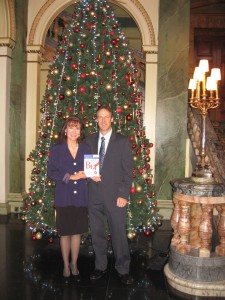 B12 Documentary at The Grosvenor Hotel, London December 17, 2010

In the United Kingdom, Kimberley Epton is producing an hour-long documentary on vitamin B12 deficiency and pernicious anemia as well.  She began filming interviews in the summer of 2010, throughout the United Kingdom.  The documentary includes the stories of many patients as well as interviews with medical specialists regarding this epidemic.  We were invited to be interviewed for this documentary, and in mid-December, Jeff and I traveled to London where we were interviewed on December 17, 2010.  The B12 documentary is scheduled to premiere in mid to late March 2011, in London.  The Pernicious Anaemia Society of the UK hopes to distribute the completed documentary to any interested television stations.  Following this, the film will also be available either on DVD or the internet.