Congress B12 Integral “Cobalamin for All 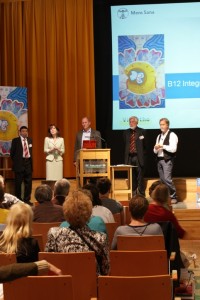 Presenters at the B12 Congress.

May 28, 2010:  Congress B12 Integral “Cobalamin4All”: First International Conference Regarding B12 Deficiency held in Driebergen, The Netherlands.

Sally was invited to speak at the Congress B12 Integral conference, sponsored by VitOrtho, in co-operation with Dr. Hans Reijnen.  The conference was held at the Antropia Culture and Congress Center located in Driebergen, outside of Amsterdam.  She was among several speakers including Dr. Joseph Chandy, Dr. Alfred Austermann, Dr. N. Westerman, and Dr. Hans Reijnen.

Sally’s presentation consisted of two presentations.  During the first 40 minutes she gave a detailed overview of vitamin B12 deficiency, its causes, signs, symptoms, complications, diagnosis, and why it is frequently misdiagnosed.  The second part of her lecture was 25 minutes and discussed the cost-effectiveness of early diagnosis and treatment. She passionately pleaded for the screening of all older adults, as well as symptomatic and at-risk patients.  She educated the audience on how billions of health care dollars are being wasted as well as how the U.S. health care system is apathetic regarding this disorder.  Both of her presentations were well received.

Dr. Chandy’s lecture was very interesting and entitled, “Doctor, you have given me my life back.”  He discussed the history of vitamin B12 and the difference B12 makes in his patients’ lives.  He gave many case reports of patients from his own practice and also detailed how B12 deficiency runs in families.  Dr. Chandy practices in northeast England at the Shinwell Medical Centre, County Durham, United Kingdom.  A patient support group was formed by his patients and can be found at http://www.b12d.org/.  It is a very informative website regarding B12 deficiency and is highly recommended.

Dr. Austermann, a psychologist from Germany, presented “The Surviving Twin” Syndrome.  Drs. Reijnen and Westerman are both general practitioners from the Netherlands practicing complementary and alternative medicine.  Their lectures discussed homeopathic treatments for B12 deficiency.

Overall, the conference was very interesting and gave Sally a wonderful opportunity to share her passion and knowledge of B12 deficiency with Europe.

Dutch artist Karin Toma was selected by Dr. Hans Reijnen to create a painting that symbolizes B12 for the Congress B12 Integral. Karin was born in 1962, in Venlo, and has lived in Deurnelf since 1987.  Karin’s passion is intuitive painting.  Her work is displayed throughout Holland in various galleries and exhibits.  Karin describes intuitive painting:  “Drawing and painting from the intuition is a way to get in touch with the unconscious.  It is like a journey into what is happening in your lives.  It consists of listening, feel and follow.”

This large vibrant painting was displayed on stage during the conference and was also used on the invitation sent out by VitOrtho.  Karin tells the story of her composition entitled “Inner Power.” “In the right wing of the butterfly, which is a symbol of transformation, you will find the letter B.  The butterfly is flying in front of a golden clock that looks like the sun and the moon combined.  This clock is also the center of a flower.  The 12 in the clock and the “B” in the butterfly show us B12. Beneath the clock there are two folded hands, like on a pregnant belly, watched by a twin looking a little pale.  When finally diagnosed with B12 deficiency, a radiant and healthy person arises out of the flower.”

Queen of the World

This painting was made for Sally by Karin.  It was presented to her at the Congress B12 Integral and is entitled “Queen of the World.” Karin provided a description of the painting as well:  “This woman looks on the world with open eyes.  She is wearing a shining crown which reaches into the sky.  With her love and wisdom she can help others, supporting the transition from the age of Pisces to the age of Aquarius.”

Sally was very moved by Karin’s composition and gift.  Karin always makes one original painting and each painting is unique.  Karin viewed Sally on a BBC interview as well as read up on her, and then created “Queen of the World,” which captured Sally’s quest to inform and educate the world about vitamin B12 deficiency.  It is proudly hung in Sally’s office inspiring her with her B12 mission.

If you are interested  in viewing more of Karin Toma’s works, please visit her website at http://www.karintoma.nl/.